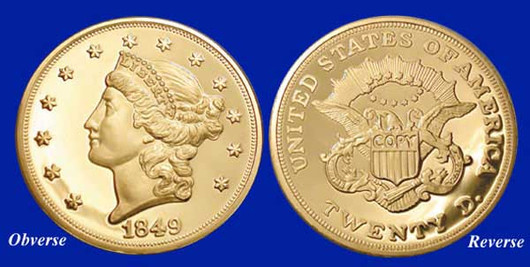 In the early 19th century, U.S. gold coin denominations had not exceeded $10 due to modest demand and limited gold supplies. Then, on January 24, 1848, the California Gold Rush began and over a half-million “Forty-Niners” made gold supplies plentiful. In February 1849, Congress authorized the striking of $20 gold coins and the “Double Eagle” was born. The first two $20 Liberty Gold pieces were struck—the ONLY ones to ever bear the date 1849. Now, over one hundred and sixty years later, only one single 1849 $20 Gold Piece survives. Housed in the Smithsonian Institution, it is a gleaming reminder of America’s Gold Rush. Collector’s can only dream about owning the priceless treasure in the Smithsonian, but now you can acquire our privately minted, non-monetary 1849 $20 Liberty Tribute Proof, clad in 14mg of 24 KT Gold, at a very affordable price!