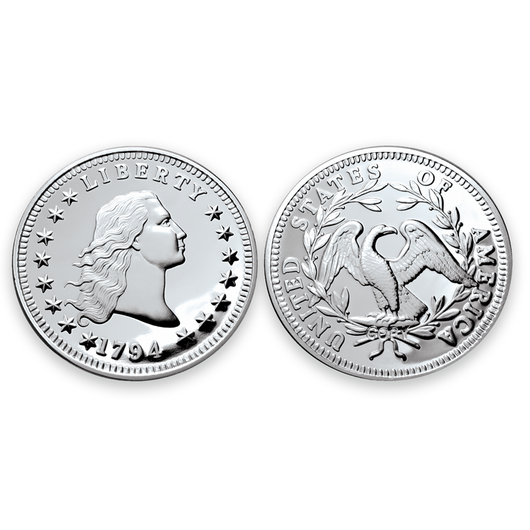 Known as the Flowing Hair Liberty Silver Dollar, it was only struck for ONE DAY due to minting problems. As a result, only 1,758 pieces ever existed. Of these, it has been reported that only about 150 are known to survive! The obverse has a youthful female figure with hair flowing freely behind her with the word “Liberty” inscribed above her.  The 1794 date is shown below, with a border of 15 stars representing the 15 states in the Union at that time.  The dollar’s reverse is a small spread-winged eagle perched on a rock and surrounded by laurel branches.  Today, the few remaining 1794 Liberty Dollars have become prized for their rarity.  In fact, in 2013 it became the World’s Most Expensive Coin when one auctioned for $10 Million Dollars!  Now you can acquire the 1794 Flowing Hair Liberty Silver Dollar recreated as a privately minted, non-monetary tribute proof clad in 71 mg .999 Pure Silver, sent to you encapsulated with a Certificate of Authenticity. A great chance to add a rare design to your collection.  Order today for a very special sale price!