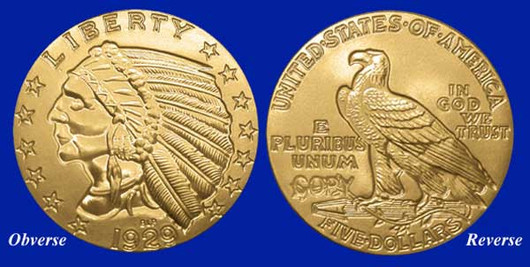 Our tribute to the Last U.S. $5 Gold Coin Ever Struck for Circulation!

When President Theodore Roosevelt called for a new $5 gold coin design in 1908, few imagined the daring, innovative masterpiece that designer Bela Lyon Pratt would produce. Unlike every other U.S. coin design, Pratt’s Indian Head is incused, meaning that the sculpted Indian is cut into the surface of the coin instead of being raised above it. In 1929, no one expected this would be the last gold $5 coin ever issued by the U.S. Government for circulation. But the Stock Market Crash stopped production. It was never to resume, making the 1929 $5 Gold Indian one of the rarest coins of its kind. Now you can add the privately minted, non-monetary 1929 $5 Gold Indian Tribute Proof clad in 6 mg of 24 KT Gold to your collection at an affordable price.