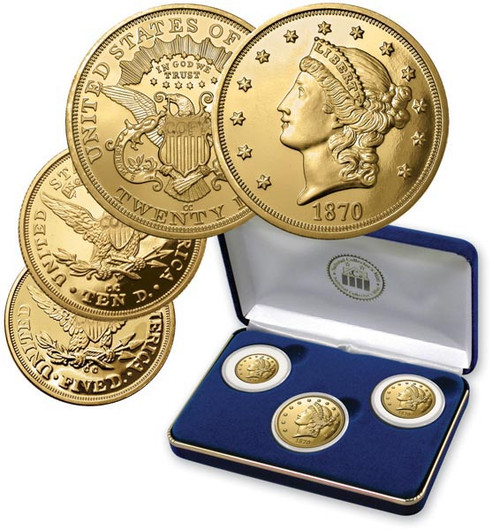 In 1870, after much  controversy, the Carson City Mint opened its doors and struck its very first  gold coins: the 1870 $20 Double Eagle, $10 Eagle and $5 Half Eagle, the first  gold coins to ever bear the coveted “CC” mint mark. Today these three coins are  so sought after by collectors that rare examples recently sold at auction for  more than half a million dollars! Now, this special release of a 3-piece  privately minted, non-monetary tribute  proof set by the National Collector’s Mint brings these 1870 Carson City  designs within your reach. Each proof is crafted to the highest quality  standards and is in Gem Proof condition. They are clad in a total of 27 mg. of 24KT gold. And each piece has been expertly struck to produce the exacting  detail and mirrored surfaces discriminating collectors demand. Set comes  complete with Certificate of Authenticity and deluxe blue collector’s  case.