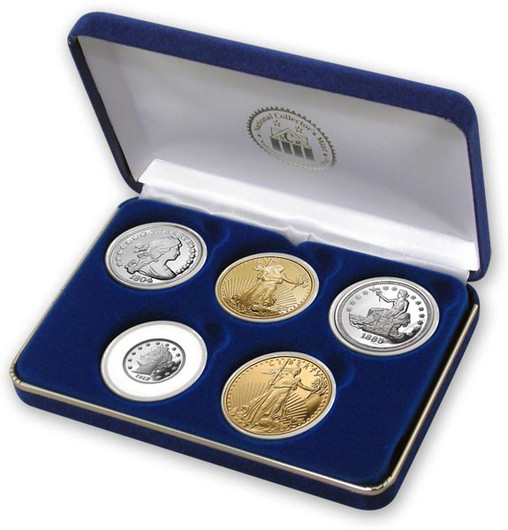 Five gem quality privately minted tribute proofs, each one clad in either 71 mg .999 Pure Silver or 14 mg 24 KT gold. These magnificent non-monetary strikings recreate some of the most valuable coins in U.S. coinage history. Now available in one magnificent complete set.

You get tribute proofs of the…

•The 1933 Double Eagle – the most valuable gold coin in the world, and the only one of its kind. It sold at auction for seven point six five million dollars!

•1907 Double Eagle – the relief on this groundbreaking gold coin was so high it actually broke on the presses, making original specimens extremely rare and valuable.

•1913 “V” Nickel – this coin was struck secretly by Gov’t employees who were supposed to be striking Buffalo nickels. Only five are known to exist.

•1885 Trade Silver Dollar – the big silver trade dollars were minted to encourage trade with the far east, and they are the only coins ever to have their legal tender status revoked. The 1885 dollar is special because minting was supposed to have stopped in 1883! But unscrupulous gov’t employees created a rare 1885 edition.

All 5 of these collector tribute proofs will come beautifully boxed in a deluxe presentation case along with our Certificate of Authenticity.