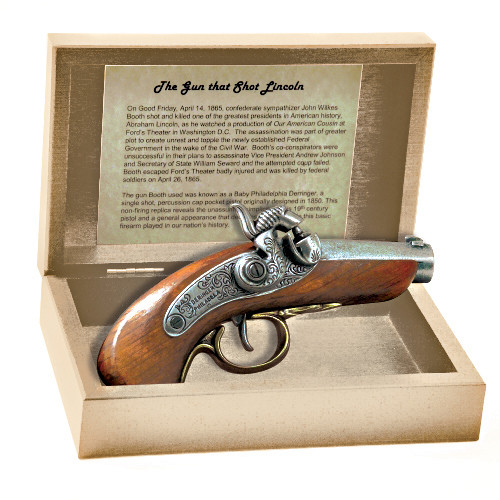 The Gun That Shot Lincoln

It was shortly before 10 pm on April 14, 1865 when Confederate sympathizer John Wilkes Booth entered the Presidential box at Ford’s theatre and fatally shot President Abraham Lincoln, the first President ever to be assassinated.  Coming just five days after Lee’s surrender to Grant, the assassination of the President was part of a larger conspiracy designed to throw the United States Government into disarray and allow the Confederacy to mount a resurgence.  Booth’s choice of firearm to carry out his plan was a Philadelphia Derringer, a single shot, percussion cap pocket pistol.  Now you have the opportunity to hold history in your hands with our Gun that Shot Lincoln.  Crafted in the style of the gun used by Booth, each non-firing replica features a wood stock, 2.5” barrel and a working percussion firing mechanism.  Holding it in your hand – with its mere one pound weight and 6.5” overall length – you’ll be amazed at the simplicity and unassuming appearance of the weapon that played such a pivotal role in our nation’s history!  Comes complete with a wood presentation box and historical story card.  Box color may vary.

THIS ITEM CANNOT BE SHIPPED TO CANADA.