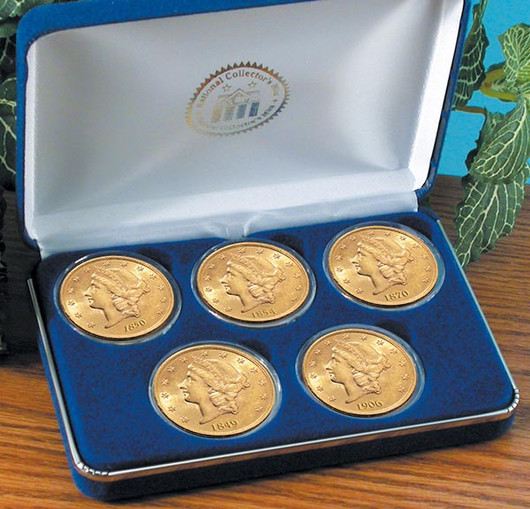 Very few U.S. coins can lay claim to being issued at five different mints. The $20 Liberty Head gold coin is one of them. In 1849, the Philadelphia Mint struck two specimens of the coin, one of which is now housed at the Smithsonian Institution, the whereabouts of the other is unknown. In 1850, the New Orleans Mint issued this coin for the very first time. In 1854, the San Francisco Mint began minting the $20 Liberty Head coin, utilizing much of the gold that had been mined by the ’49ers. In 1870, the Carson City Mint began issuing this gold coin with the coveted “CC” mint mark. Finally, the Denver Mint began striking this coin in 1906, one of only two years that it was minted there. Now you can obtain a complete first-year-of-issue set of five privately minted non-monetary gold clad tribute proofs. The set recreates these five important first-year-of-issue coins, each as 14 mg 24 kt Gold clad Proofs.