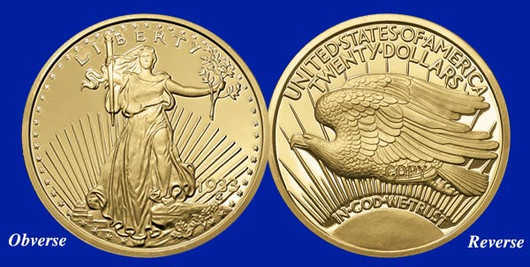 In 1933, the Gold Confiscation Act called for that entire year’s $20 gold coin mintage to be melted down. Then in 1944, a specimen, possibly pilfered by a government employee, was inadvertently approved for export to the fabulous collection of King Farouk of Egypt. This fabled coin reappeared in 1996 when a British dealer attempted to sell it. U.S. Government agents seized it, and in a legal settlement, it was placed on the auction block. It was sold in July 2002 in New York City for a record $7.6 million dollars—making it the highest price for any legal tender gold coin ever sold. You can now capture the mystery in our beautiful, privately minted, non-monetary adaptation of the 1933 Double Eagle design as a 14 mg  24 KT Gold clad Tribute Proof at an affordable price.