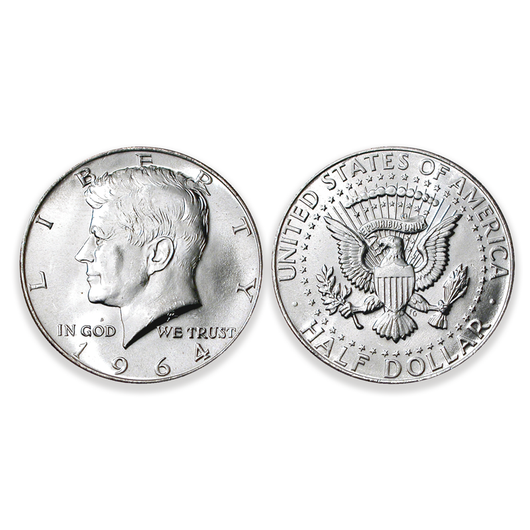 Struck to honor John F. Kennedy, our beloved 35th President, these silver coins were first minted on February 11, 1964 – less than three months after his tragic assassination in November, 1963.  The coins feature the bust of our late President on the obverse, the image taken from Kennedy’s Inaugural Medal, with the Presidential Coat-of-Arms on the reverse.
Struck in 12.50 grams of .900 Fine Silver, these magnificent First-Year-of-Issue Kennedy Silver Half Dollars also have the distinction of being the LAST silver half dollars ever struck for circulation by our Government.  In 1965, a decision was made to change the half dollar composition to 40% silver clad from 90% solid silver - the standard that had been in effect since 1837!  In 1970, the silver would disappear entirely from circulating half dollars.  A must for every collector – order yours now!