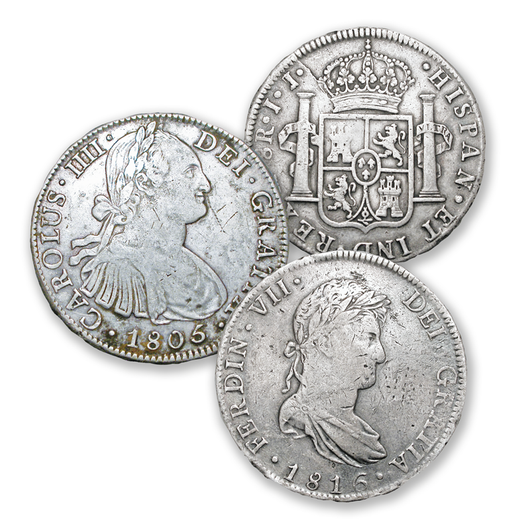 Do you know how our coinage began?  Our leaders adopted the silver Eight Reales, the huge coin from the Mexican silver mines. The American colonies employed this great trading coin to fund their War for Independence.  After the war, Thomas Jefferson named it the “First U.S. Silver Dollar.”

The first United States legal tender silver dollar was minted, not here, but in Mexico City.  It was the Eight Reales, the “Pieces of Eight,” whose scrolls on its reverse were the origin of the American dollar sign. The Eight Reales was the largest and heaviest silver coin minted for over 200 years, actually bigger and heavier than the Morgan Silver Dollar. These Eight Reales were minted between 1772 and 1826, the beginning of American silver coinage. Most every one of these coins is in Very Good or better condition—some even feature “chopmarks!” “Chopmarks” were used by international traders to authenticate the silver content of the coins. Due to fluctuations in the price of silver, we’re not sure how long we can hold this price, so call today to get yours.