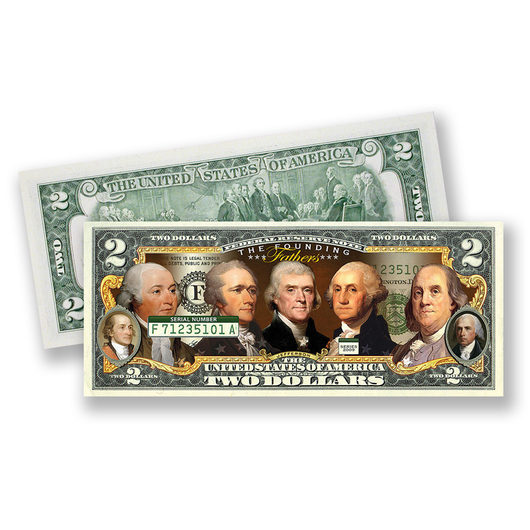 Each is a Genuine, Authentic, U.S. Legal Tender $2 Bill which has been enhanced by us with beautiful colorized images on the obverse of the bill. Accomplished using a revolutionary colorization process, you’ll see the best-loved images of America’s founders come vibrantly to life in a stirring group portrait across the front of the bill. Also featured is the classic representation of The Signing of the Declaration of Independence by artist John Trumbull on the back.

Included is a Certificate of Authenticity guaranteeing that your bill is authentic U.S. legal tender, and assuring its Collector Edition status. Each $2 Bill has been directly removed from untouched, wrapped Federal Reserve sealed packs, and preserved in a handsome folio to maintain its fresh, Crisp Uncirculated condition.

During this limited time offer, this magnificent example of the engraver’s art can be yours for only $19.95 each.  Due to intense interest, we must limit orders to no more than five “Founding Fathers Uncirculated $2 Bills.”  Get yours today while these amazing collectibles are still available!