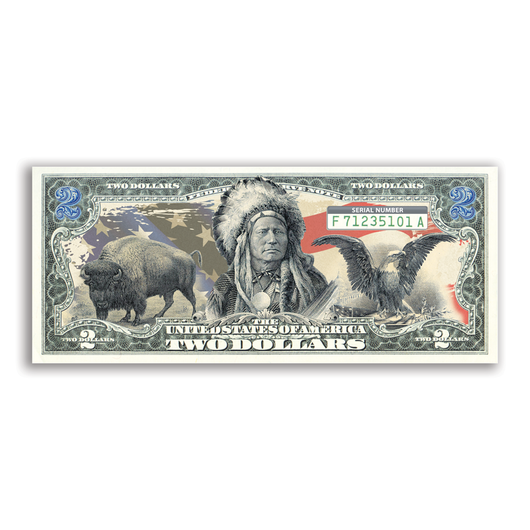 The Most Unique Images Ever on U.S. Currency
together on a Spectacular $2 Bill!

Of all the banknotes ever issued by the U.S. government, three are among the most sought after. Each of the three has a dramatic image on the front that shouts, “I am American and proud of it.” You now can obtain a crisp uncirculated legal tender United States $2 banknote celebrating those iconic images – together for the first time!  Each originated on a silver certificate that widely circulated around the turn of the 20th century.  Now, they are recreated by us on a genuine uncirculated legal tender United States $2 bill through a heralded high definition colorization process. The inspiring and patriotic “Black Eagle” first appeared on a silver certificate issued 120 years ago in 1899. The glorious “Indian Chief” hails from the $5 silver certificate from 1899, and is a portrait  of Chief Running Antelope of the Lakota Indians.  Finally, there’s the “American Bison” from the 1901 $10 note, the noble symbol of the American West.  All three of these rare and beautiful designs are represented together on this one spectacular $2 bill!  Comes in an archival sleeve for protection and display along with Certificate of Authenticity.  Supplies are limited. Don’t wait ... order yours today!