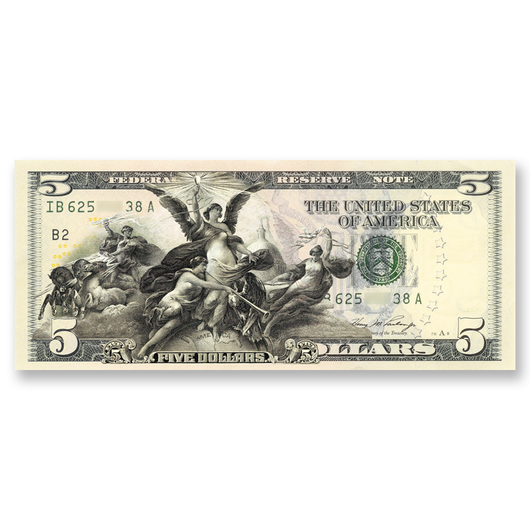 In 1896, the chief of the Bureau of Engraving and Printing ordered a redesign of the Silver Certificates currently in circulation.  Silver Certificates, unlike today’s currency, were redeemable for actual silver as appropriate for the face value!  The chief commissioned three artists and the result was some of the most beautifully made notes in United States history!  The  notes used symbolic designs.  In the $5 issue, the classical central figure represents electricity, a discovery that was on the brink of changing the world (today, we know that it did indeed change the world!).  She is surrounded by other allegorical figures, and the U.S. Capitol building is seen in the background.

While beautiful, these notes were not without problems.  Bank tellers complained that the notes could not be counted at a fast pace because the denominations weren’t in the corners.  After much handling the ink smeared and the notes became hard to read.  To top it all off, the design of the $5 note caused quite a stir because of Liberty’s bare breast.  In fact, some banker reportedly refused to accept the notes because of this!  In the end, the series was short lived, but created quite a collectible.  Uncirculated examples of these notes can sell in the thousands!  Now, you can acquire modern tributes to these classic currency designs.  Through a revolutionary process, the major design elements of these classic notes are transferred to actual U.S. currency, creating a one-of-a-kind collectible sure to become a highlight of your collection!  Buy your favorite design, or get the complete set at a special savings by clicking here.  Don’t delay, order today!