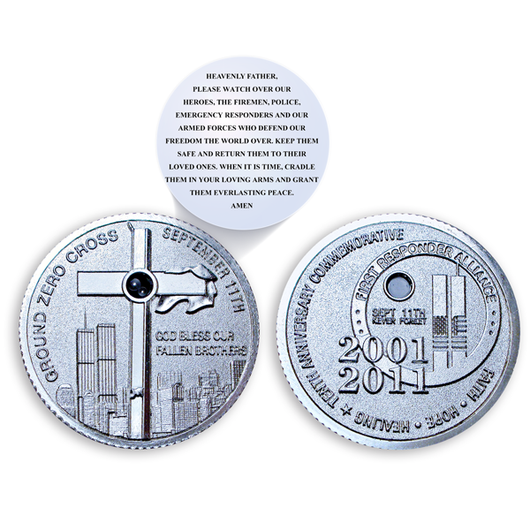 The Ground Zero Cross… a spiritual symbol, a sign of hope to the First Responders who were doing God’s work in the days after 9/11. Now, it appears on our one-of-a-kind Silver-clad 10th Anniversary September 11th commemorative, featuring a special heavenly window in the center of the cross.  Hold the window up to the light and watch as this historic, spiritual commemorative reveals a heart-rending heroes prayer right before your eyes -- a prayer for our rescue workers, Police, Fire and Military personnel. This 2011 Ground Zero Cross Commemorative was authorized and endorsed by the First Responder Alliance program of the Trusted 9/11 charity that supports First Responders and Families. This private, non-monetary commemorative is clad in 71 milligrams of Sterling silver and will never be released for circulation.