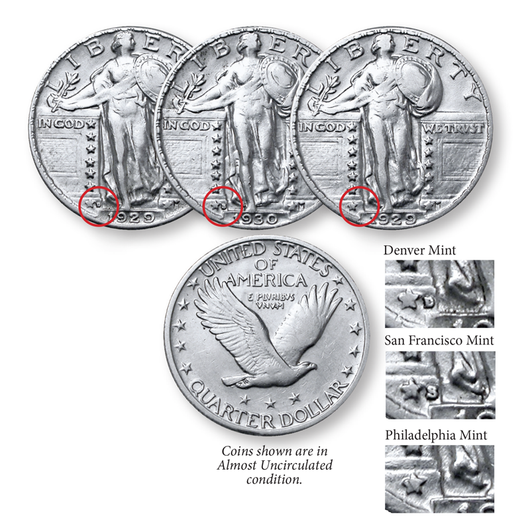 The Standing Liberty quarter series is undoubtedly one of our most beautiful coins, and is very popular with collectors. This classical design was struck for just 15 years between 1917 and 1931, and ended when the Washington Quarter series began in 1932 to honor the bicentennial of our founding father’s birth. Born during the age of WWI, the obverse features Liberty facing right, toward the direction of the European War, clad in a suit of chain mail, a shield in one hand and an olive branch in the other. According to the designer, Liberty was “stepping forward in … the defense of peace as her ultimate goal”. Sadly, this would mark the last time Lady Liberty would appear on a circulating quarter since the denomination was first struck in 1796. Celebrate this magnificent design with our three-coin Standing Liberty Quarter Mint Mark Set. You’ll receive one coin from each of the mints that produced these coins – Philadelphia, San Francisco and Denver – in Fine or better condition. Comes in a deluxe display with Certificate of Authenticity. Don’t wait, order now! (Limit 5)