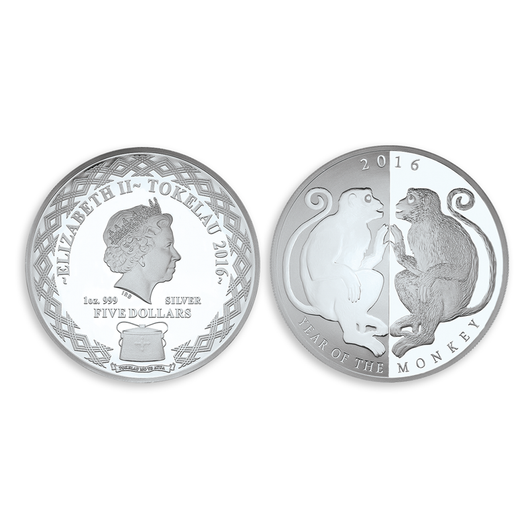 Those born under the sign of the Monkey (1908, 1920, 1932, 1944, 1956, 1968, 1980, 1992, 2004, and 2016) are known to be wise, intelligent, and charismatic leaders. Inquisitive and inventive, they can be some of the most loyal people you know. Not without their faults, however, they can also be arrogant, egotistical and snobbish. Now, you can honor the two sides of the monkey personality with the 2016 Mirror Monkey $5 coin from Tokelau. Each non-circulating legal tender coin contains one full ounce of .999 Pure Silver and is a massive 65mm in diameter. The reverse design features two monkeys facing each other with one half struck in a traditional cameo proof finish. The same image is mirrored on the other half, but in a modern reverse proof. On the obverse, the Queen’s effigy appears along with guaranteed weight and denomination. We’ve been lucky enough to acquire the last 50 coins in the tiny 500 coin worldwide mintage and are making them available to you while they last! Don’t delay, order now!