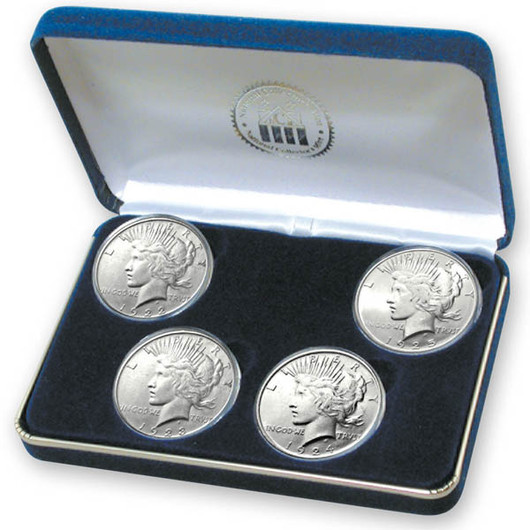 In 1920, the 18th amendment to the U.S. Constitution went into effect, banning the sale, manufacture and transportation of alcohol. Prohibition was supposed to usher in an era of economic and moral austerity, but just the opposite happened. Americans were determined to have a drink – legally or not – and people started to party in record numbers. Crime increased 24% between 1920 and 1921 alone. Organized crime mobilized and made millions quenching America’s thirst. Gangsters like Al Capone in Chicago and Lucky Luciano in New York rose to prominence. Because alcohol was illegal, the prices skyrocketed. These Silver Peace Dollars from the Philadelphia Mint might have actually been used to purchase bootleg whiskey in one of the thousands of speakeasies that sprang up across the country. The Roaring Twenties Collection features the 1922, 1923, 1924 and 1925 issues, each in fine or better condition. Sent complete with a Certificate of Authenticity in a handsome blue display. Own a piece of American history in .900 Fine Silver. Order today.