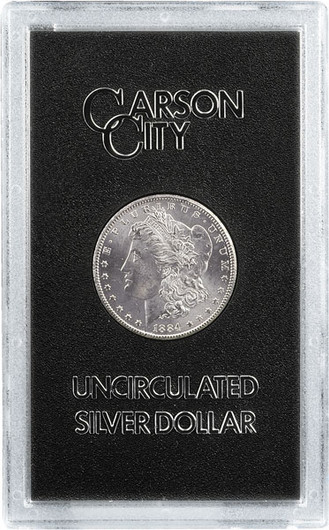 There is no denying the special appeal of the Carson City Morgan Silver Dollar to collectors.  Minted from 1878 to 1885 and then from 1889 to 1893, only about 2% of all Morgans bear the precious “CC” mint mark.  “CC” dollars were minted and circulated at a time when much of America was a wild frontier.  But with the new century came political and economic tumult – and hundreds of millions of Morgans were melted by the U.S. Government, as well as by speculators and silver profiteers.  “CC” Morgans became more and more scarce.

Then, during a 1964 inventory audit, Treasury staff uncovered an astonishing hoard in their very own vaults!  A stash of uncirculated Carson City Morgan Silver Dollars was discovered. The government’s General Services Administration (GSA) sealed them in special black, plastic holders and auctioned them by mail to the public. Demand was so great, that the GSA oversold their stock and had to return payment to over 300,000 collectors!

Now we’re offering a special release of these treasured “CC” Morgans to preferred customers like you – all still in their original GSA “Black-Packs”, each and every one in Brilliant Uncirculated condition.  Don’t miss out on this rare opportunity.  Order today!