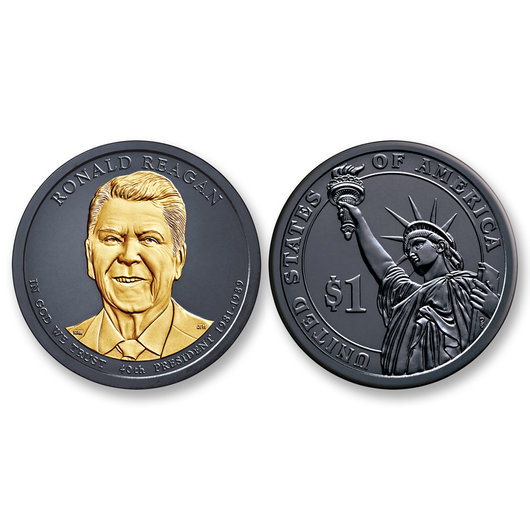 He was “The Great Communicator”, a President who made our hearts swell with pride to be Americans. He brought down the Berlin Wall, won the Cold War and began one of the greatest periods of economic growth in American history. He even had immense impact on the coin world, signing into law the “Liberty Coin Act” in 1985, which created the Silver Eagle Dollar, one of the most popular silver bullion coins ever! It’s only fitting then, that he is honored on his own coin – the Reagan Presidential Dollar. Issued in 2016, it is the last dollar in the government’s Presidential Dollar series. As if that wasn’t enough of a reason to be a highly desirable collectible, we’re making it irresistible, cladding it in over 1 mg of Black Ruthenium, one of the rarest elements on earth! Ruthenium is a member of the Platinum family, and is found in only 1 part per billion in the earth’s crust. Compare that to silver’s 75 parts per billion and you can see how much rarer it is! Then, as icing on the cake, Reagan’s bust is selectively layered in 24 Kt gold. We’re sure when you see it, you’ll agree this is a breathtaking tribute to one of our most beloved Presidents. Don’t wait, order today!