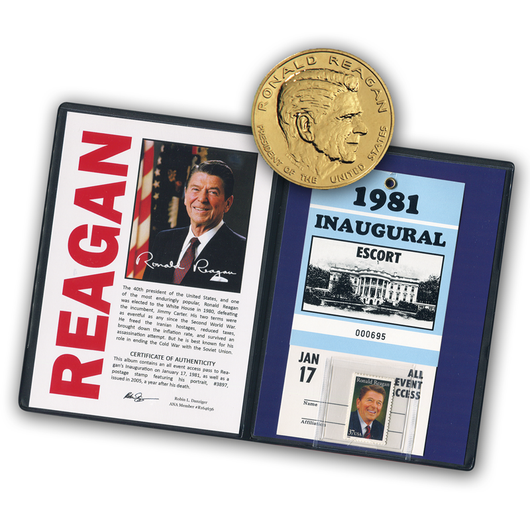 Imagine the excitement, the festivities, and the atmosphere of celebration. The date was January 20, 1981, the oath of Ronald W. Reagan’s inauguration.
As Reagan was giving his inaugural address, the 52 Americans held hostage in Iran for 444 days were released.  Reagan announced the event by saying, “With thanks to Almighty God… some 30 minutes ago, the planes bearing our prisoners left Iranian air space, and they are now free of Iran.”
Throughout the country, there were celebrations to mark the inauguration and the release of the hostages. For the only time, the national Christmas tree near the White House was lighted on an Inauguration Day… patriots wrapped the country in yellow ribbons, and prepared to welcome the freed hostages home. The Statue of Liberty in New York harbor was bathed in light, the Empire State building lit in red, white, and blue!  What a glorious time to be an American!
Now you too can experience a bit of the excitement and grandeur of that monumental day in American history with the new President Ronald Reagan 1981 Inaugural Collection. Each collection includes a mint-condition United States postage stamp featuring Reagan’s portrait, and his United States Mint Presidential medal, clad by us in gleaming 24 KT gold.  Most important of all, you’ll receive, as the centerpiece of the collection, an authentic Inauguration Pass to the 1981 Reagan Inaugural event.  THIS IS A GENUINE ARTIFACT FROM AMONG the THOUSANDS THAT WERE USED BY ATTENDEES ON THAT GREAT DAY IN 1981.
This is an important collection, and due to the limited numbers of Inaugural Passes we have located – only 475 – supplies of this groundbreaking collection will not last long.  Each collection is accompanied by a Certificate of Authenticity signed by Angela M. “Bay” Buchanan, 37th Treasurer of the United States appointed by President Reagan himself.  Please, we urge you to avoid disappointment and future regret.  Order yours today!  (pass details may vary)