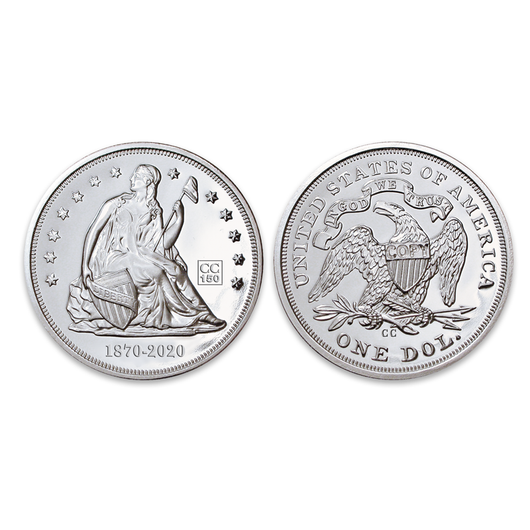 The Carson City Mint was built for one purpose – to handle the massive amounts of silver coming from the Comstock Lode – our nation’s largest silver strike.  Prior to its founding, silver and gold ore mined in Nevada was sent to San Francisco for processing, an expensive and risky journey.  Although long delayed by the Civil War, the long-awaited first Carson City minted coins rolled off Coin Press #1 on February 11, 1870.  Fittingly, the coins were Seated Liberty Silver Dollars.  A mere 12,462 coins were produced that year and uncirculated examples can cost $25K or more … if you can find them.   Now you can own an 1870-CC Seated Liberty tribute to this historic coin for a mere fraction of the original! Privately minted in deep relief, with the frosted images and mirror-like background of PROOF coins coveted by collectors and investors, each bears a special one-year-only double date 1870-2020 and is clad in 71 mg .999 Pure Silver.  Each of these privately minted, tribute proofs faithfully recreates the Seated Liberty design with one very special difference -- we’ve added a unique “CC 150” privy mark to assure you that each is a genuine 150th Anniversary release.  Don’t wait, order now!